This creamy white mac and cheese is so easy and delicious that you will wonder how you ever lived without it.

Why is this the BEST white mac and cheese recipe?

This white mac and cheese is also a frequent guest at my gatherings as it:

Handy recipe to have, right?

I first created this recipe for my youngest daughter. Aka: the picky eater.

The one thing she was always guaranteed to eat was Panera’s mac and cheese.

What I wasn’t counting on was that she would like it so much that she traded her affection of Panera’s mac and cheese for mine.

I quickly learned I could easily modify the amounts for single serving size as well. Phew!

What is the best cheese for white mac and cheese?

Begin by boiling water and cooking your pasta of choice per package recommendations for “al dente”.

Make a roux for the white sauce

While the pasta is cooking, make the roux. A roux is a mixture of flour and a fat (in this case butter) that is used as a base and thickening agent for the sauce.

Add the butter to a medium-large heavy sauce pan and melt over medium heat. Once melted, add the flour and stir well.

Simmer over medium heat 2-3 minutes, stirring occasionally to cook out the “flour” taste.

Slowly add the milk while stirring constantly until well combined.

Simmer for 3-5 minutes until the sauce becomes creamy and thickened.

At this point the sauce is referred to as a bechamel, or white sauce.

Bechamels are used as a base in many french recipes or when making creamy sausage gravy.

Stayed tuned as you’ll be seeing this again soon in some of my upcoming recipes. I have a suspicion that a croque madame is coming soon.

Next, add the shredded white American cheese and salt.

Stir well until all of the cheese is melted and the sauce is heated through. Remove from the heat.

Combine the pasta and cheese sauce

Drain the pasta and add to the yummy sauce. Fold in gently and then let the pasta sit in the sauce for at least 3 minutes to allow the sauce to absorb and get into all of the nooks and crannies. 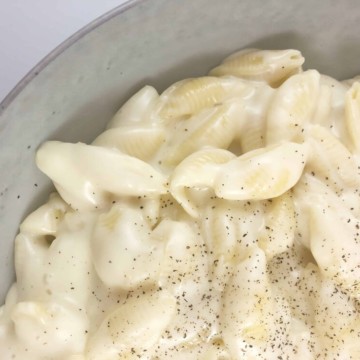 Melinda | Missouri Girl
This easy homemade white mac and cheese is better than any store bought or restaurant mac and cheese and can be made ahead of time and kept in a crock pot for large gatherings.
Print Recipe Pin Recipe
Prep Time 10 mins
Cook Time 10 mins
Total Time 20 mins
Course Main Course
Cuisine American
Servings 10