What is better than cheesecake?

A white chocolate blondie topped with a layer of creamy vanilla cheesecake.

These things should come with a warning label. They are seriously addicting.

I first made these bars in 2008 and continued to make them for every gathering the entire year before I decided I needed to give other desserts a try.

I made them again for a football party the other day and I was quickly reminded why it is one of my favorites.

Kids and adults love them, they feed a crowd, and they are incredibly filling.

Blondies are one of my favorite dessert bars.  Add white chocolate into the mix and you have a truly addicting  combination.  The result is a slightly gooey, almost caramel like blondie that is moist and, as I already mentioned, addicting.  When white chocolate is baked it tends to caramelize which is just about the best thing ever.

Cheesecake is so decadent you would think it is hard to make but cheesecake is actually one of the easiest desserts to make.  Just four simple ingredients are needed (cream cheese with sugar, eggs, and pure vanilla extract) for a creamy and delicious cheesecake topping

Cheesecake bars that feed a crowd

This recipe makes a large batch of thick white chocolate cheesecake blondie bars in a 9 x 13 pan. If you want a smaller amount you can easily cut the recipe in half and bake it in an 8 x 8 dish. 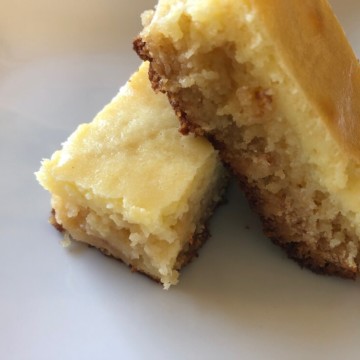