This healthy banana nut farro breakfast bowl is filling, nutritious, delicious and the perfect way to start your day.

I am typically an oatmeal-for-breakfast-every-weekday kinda girl.

It’s hearty, healthy, yummy, easy, and you can always mix it up a bit by changing the add-ins.

My new favorite grain is farro.

Farro is an ancient grain that’s well known for its health benefits.

It is rich in fiber, iron, protein, minerals like magnesium, and antioxidants. Perfect for a healthy, hardy breakfast or fueling for your runs/workouts.

It has a slightly nutty flavor and has a firmer, slightly chewy bite. It bares many similarities to barley.

How can I use farro?

Farro is widely used in both sweet and savory dishes.

I once made a mushroom farro that was similar to a risotto. It was delicious!

My favorite way to use it, however, is as a breakfast bowl.

This recipe is for a single serving. Just double or triple the recipe depending on the serving size needed.

How to make farro?

To start, it is recommended to rinse the farro prior to cooking, like you would rice, but I find myself skipping this step more often than not.

Next, lightly toast the farro over medium-low heat for about 10 minutes, until lightly toasted. Swirl frequently for even toasting and to prevent burning (this step is optional, but brings out the nutty flavor in the farro).

Bring 1 cup water and ⅛ teaspoon salt to a boil.

Stir in ½ cup farro. The traditional ratio is 3 parts water to 1 part farro, but I like to cook down the farro and then add the milk of choice so it has a creamier texture. in this case, I started with a 2:1 ratio.

As it cooks, you’ll notice that the farro does not expand much, but the water will start to dissipate.

Once all of the water has been absorbed (about 15 minutes), you are ready for the next step.

How to make a Banana Nut Farro Bowl

Now it’s time to add your milk of choice and half of a mashed, ripe banana. Stir well.

For this breakfast farro, I went with a banana nut version which is my favorite so far. You seriously feel like you’re indulging in a warm slice of banana nut bread. Yum!

Farro is so versatile and you can make a large batch ahead of time for added convenience. Just boil the farro and store in an airtight container until you are ready to use it (I store it for up to 3 days). Then just add your desired mix-ins and heat on the stove. 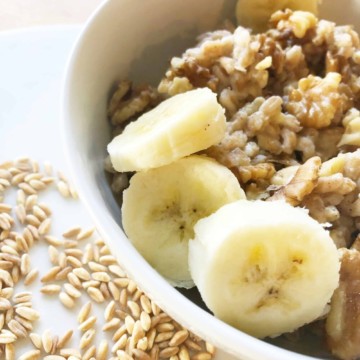