Looking for an amazing chunky potato bacon soup recipe that is thick, hearty, and tasty? This is the ultimate comfort food. Have it traditional, loaded, or put a unique spin on it with the addition of nontraditional toppings (see below for ideas).

I probably should have called this recipe Double Bacon Potato Soup as it has a bacon infused soup base AND a crunchy bacon bit topping.

So what makes this potato soup different from the others? The texture. Thick and creamy with hearty chunks of potatoes. Perfect!

There are many different ways to thicken potato soup, but I developed a unique method (at least I haven’t seen it before) using… mashed potatoes.

Yes, this recipe can be dairy free by using cashew milk instead of regular milk. I have made it with both cow’s milk and with cashew milk. I was pleasantly surprised to find the two recipes were virtually identical with the same texture, thickness, and flavor. The picture below has two bowls of potato soup, one regular and one dairy free. Can you tell which one is the dairy free version?

The bowl in the top right is the dairy free version. I’m telling you, it’s AMAZING!

You can add whatever toppings you want to potato soup as it works very well as a base to many different flavor profiles. Here are the traditional toppings which is often referred to as Loaded Potato Soup.

Potato soup is the perfect base for a variety of flavors. Want to take your soup to the next level? Try adding any of the following toppings for a unique twist:

Plan your weeknight dinners carefully and you can use that left over crock pot bbq pulled pork as a yummy topping.

Take your favorite Philly cheesesteak recipe and dump that steak (or chicken), peppers, and onions right on top.

This is the perfect way to sneak a few extra veggies in. Add some precooked broccoli and 2 cups of cheese into the soup base about 5 minutes before serving.

What goes well with pot roast? Mashed potatoes! This thick potato soup base is perfect for your favorite beef and gravy recipe.

While the potatoes are boiling, chop the bacon into bite sized pieces and add to a frying pan. Fry the bacon until crispy, stirring occasionally. Save ¼ cup of the bacon grease (careful as it will be very HOT). Set the bacon aside to cool on a paper towel.

While the bacon cooks, dice one large onion and add to a fry pan with olive oil. Cook over medium heat until lightly browned and tender. Add the garlic and cook for about 2 minutes.

Add the onion mixture above to a small food processor and puree until a smooth paste is formed (careful as the onions will be HOT). If you have difficulty with the onions sticking to the sides of the food processor, just add a little more olive oil.

Add the flour to thicken

Return the onion puree to the pan and add the flour. Cook for 2 minutes, stirring constantly. Add the milk and cook until thick and bubbly, stirring slowly. Then slowly add in about ½ of the chicken broth and stir well. Bring to a simmer.

While the soup base is simmering, drain the potatoes and add about ½ of the cooked potatoes to a large food processor or blender. Add the rest of the chicken broth and pulse until mashed potatoes are formed.

Add the mashed potatoes to the soup base and stir well.

Add the soup base to the remaining potatoes in the large stock pot and place over medium heat. Cook for an additional 5 minutes and then serve with your favorite toppings. 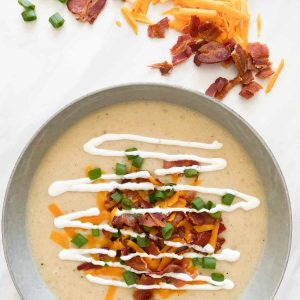