Sometimes the best things come unexpectedly. So is the case of the FIRST time I FINALLY made the BEST easy homemade rustic sourdough bread.

A sourdough is a natural yeast that contains beneficial bacteria and releases carbon dioxide. All of these things help with the rising and fermentation process.

Sourdough is also thought to be a healthier alternative to traditional breads due to it’s easier digestion, presence of healthy bacteria/microbes, and it’s ability to (possibly) help decrease the usual blood sugar spike that is associated with carbohydrate intake.

How do I get a sourdough starter?

There are 3 ways that you can get a sourdough starter starter:
1. Make your own.
2. Get an established starter from a friend/neighbor/family
3. Purchase from a reputable company

Making your own starter isn’t difficult, but it is a time commitment and requires patience. To get your starter going you basically combine flour and water then allow it to capture the bacteria and yeast that are naturally in the air. Then you discard some of the mixture and “feed” the remaining sourdough additional water and flour to keep all the microbs in balance. There is a bit of a learning curve to this but if you are interested in learning more then I recommend checking out this tutorial by the Pioneer Woman, which will take you step by step through the process.

Taking care of your sourdough starter

Once your starter is well established, you can evaluate how often you plan on baking and using your starter. If you are a regular baker, then it makes the most sense to keep the starter on your counter at room temperature so that you always have sourdough starter that is ready to go. The biggest con of this is it’s a huge commitment and you have to make sure your starter is getting consistent and daily feedings. Which means using LOTS of flour. If you are planning on using it less regularly, then you can decrease the amount of feedings required by sticking it in your refrigerator. This will allow it to go into a temporary dormant state which will require MUCH less feeding (every 1-4 weeks) instead of daily. As you can see there is a wide variance in the recommended feeding time frame.

When you are ready to bake, you can take it out of the fridge, feed it, and allow it to “wake up” before using again.

Bread has been my nemesis for years. It’s the one thing I have had a difficult time mastering. I think part of the problem is how high I set the bar. I want that perfect, crusty crust with a super soft, airy center with the perfect texture… made at home in my own oven.

I also want as little fuss as possible. Anyone who has ever dove into the world of sourdough bread knows that is a tall order, indeed.

My first venture into sourdough was several years ago. I made my own starter from scratch and nurtured that baby for months.

Yes, your sourdough starter is a child. You must care for it and feed it for it to thrive. But there is good news, the child can go to grandma’s for extended breaks when you need a break. I’ll tell you how later.

I ended up with a good loaf of sourdough that first attempt but was left feeling a little underwhelmed at the end product vs the effort it took to get there.

Fast forward several years and the itch was back. I have made many “good” loaves of bread but I had yet to bake THE ONE.

I had been contemplating beginning a new sourdough starter when one literally landed on my doorstep, courtesy of a neighbor.

And the sourdough craze began once again.

I read several tutorials on how to make the perfect sourdough loaf because, really, isn’t that the ultimate goal of having a sourdough starter… to make the most fantastic bread ever right at home?

I was quickly reminded that making a perfect sourdough can be a bit overwhelming and there are a LOT of different opinions and techniques on how to go about it.

So I set out one afternoon with the best of intentions. I was going to nail this bread-making business once and for all.

However, sometimes life has other ideas… or I just got busy and forgot about my dough.

So at the time I was supposed to be stretching and folding the dough, I somehow wound up in the garden with dirt on my hands. Then in the workshop building a table. I believe there was a walk around the neighborhood in there as well.

You can probably start to see why my husbands nickname for me is “butterfly”.

I finally remembered my poor forgotten sourdough HOURS later and it was starting to get late in the day.

I wasn’t about to throw the dough out, so instead I gave it a quick stretch and fold then stuck it in the refrigerator in hopes that I could salvage it in the morning.

When morning came, I set the dough out to warm up to room temperature and went about my usual morning routine. A few half hearted “stretches and folds” later (you can see I was not overly hopeful I was going to have a successful product) I put it into my preheated dutch oven and threw it into the oven.

40 minutes later… I pulled a promising loaf of sourdough from the oven. The outside looked amazing. However I tried not to get too excited because I’ve made bread in the past that looked fantastic on the outside, but was a huge disappointment on the inside.

It was absolutely perfect in every way. A crispy crust with a light and airy (but chewy) inside.

Reminiscent of my favorite sourdough bread from by favorite bakery.

This was THE bread that I’ve been trying to achieve for years.

I was so excited that I turned around and immediately started another loaf, again with perfect results.

Cost (not including the cost of feedings):

Under $1.00 per loaf (depending on purchase price of flour)

Set a bowl on top of a kitchen scale. Zero it out so the weight of the bowl is not measured. Add 100 grams of starter to the bowl. Make sure your starter is nice and active. See the bubbles? That’s a great sign. Not sure if your starter is active? You can test this by dropping a small amount into a glass of water. If it floats, it’s ready to go. If it sinks, it is not active enough and you will need to continue to let it ferment at room temperature.

Zero the scale once more and add 375 grams of VERY WARM BUT NOT HOT water to the starter. You may want to use filtered water if you have chlorine or other treated water.

Stir the starter mixture until well combined. Zero the scale once again and add the flour and salt and stir until combined. Cover with plastic wrap.

Let sit at room temp, covered with plastic wrap for 3 hours and then give a quick stretch and fold around all edges. Stretching and folding the dough sounds complicated but it is really very simple and it’s necessary to improve the texture of the dough and to add air bubbles. This will result in those signature little air pockets in the baked loaf. To fold and stretch the dough you wet your fingers, grab the underside of the dough, lift and then pull the dough to the opposite side. You will repeat these steps all the way around the dough, about 5-6 times total.

Put in the refrigerator overnight for about 11-12 hours.

Stretch and fold the dough around all edges. Allow to sit at room temperature, covered with plastic wrap for 30 minutes

Dump the dough ball onto a well floured surface that somewhat resembles a ball. Allow to sit for 30 minutes. Meanwhile, turn oven on to 500 degrees with dutch oven inside with lid on.

The final “reshape” and bake of this easy homemade sourdough bread:

Bake at 500 degrees for 30 minutes in dutch oven with lid on then remove the lid (VERY CAREFULLY FOR IT’S VERY HOT) and bake for another 10-15 minutes. Watch carefully as the top may burn easily. Remove from the oven and CAREFULLY remove the bread from the dutch oven. Allow to cool for at least 2 hours. Listen to the little crackles as it cools. So cool!

Now that you know all the tricks and tips for the best sourdough, Click HERE to learn how to make perfect Homemade Cinnamon Rolls 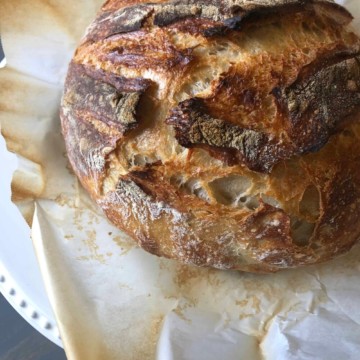 Shaping and the Bake:

We use cookies to ensure that we give you the best experience on our website. If you continue to use this site we will assume that you are happy with it.OkPrivacy policy